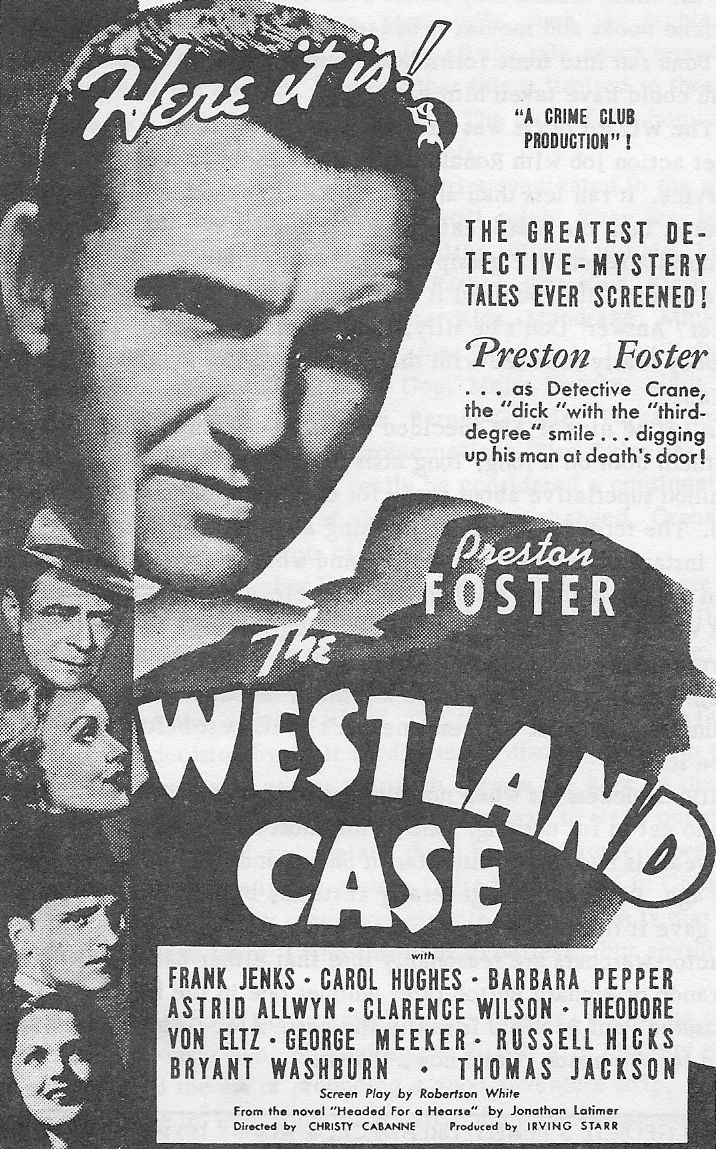 A detective must solve a case where a girl was murdered in a room--and all the doors and windows were locked from the inside.

tags: Devil-may-care, nibble-witted Detective Crane, who has no clues or time to trace them, but turned to a seething mystery inside out anyway!

DOWNLOAD (Mirror #1)
[-split044o32-addifp60x105x109x103x32x119x105x100x116x104x61x34x52x48x48x34x32x115x114x99x61x34-addifs34x32x47x62[NF_images]
A detective must solve a case where a girl was murdered in a room--and all the doors and windows were locked from the inside. Bill Crane, a private detective with no weakness as an investigator but large ones for blondes and straight-whiskey, gets a call from his attorney friend, Charles Frazee, with a request to find evidence that will free Robert Westland, who is under death sentence for murdering his wife. Crane immediately runs into a barrage of machine-gun fire, and a blonde, Agatha Hogan, only slightly less dangerous. After a night of wine, women and song, Crane picks up a clue that may aid Wstland. With the help of a deep-sea diver, a stop watch, and a taxicab driver, he is sprinting after the real culprit...just as Westland is starting his last mile to the electric chair. 1937's "The Westland Case" began the regrettably short-lived series of Crime Club mysteries from Universal, clearly superior to their Inner Sanctums but more difficult to find. Of the 7 official entries, 3 starred Preston Foster as hard drinking, perpetually sleepy Detective Bill Crane, and Frank Jenks as his wisecracking sidekick Doc Williams; such was the case with this first one, as Robert Westland (Theodore von Eltz) has only six days left to live, convicted of murdering his wife, whom he was in the process of divorcing. Crane and Williams are summoned when someone sends Westland a note promising to alibi him, but every time a new lead becomes promising, the subject winds up dead. The dead wife was discovered locked in her room, her key still lying on the table beside the body, and her husband in possession of the only other key, plus his gun has seemingly disappeared after the murder. Foster and Jenks excel in their tailor-made roles, not dissimilar to the "I Love a Mystery" duo, Jack Packard (Jim Bannon) and Doc Long (Barton Yarborough), who also did 3 features in 1945-46. Russell Hicks and George Meeker make a decent pair of suspects, and Ward Bond plays Westland's fellow death row inmate Connors, who puts him onto the right lawyer to get him out, played with great relish by scene-stealing Clarence H. Wilson (frequently seen opposite Charlie Chase in 2 reel Hal Roach comedies). The other Bill Crane titles are "The Lady in the Morgue" (bringing back Thomas E. Jackson and Barbara Pepper) and "The Last Warning" (both 1938). Editor Otis Garrett graduated to director with the next Crime Club, "The Black Doll," missing out on just one, "The Last Warning." This may be hard for you to find. Mine is the first comment, so I will describe the story a bit.

It is fairly typical in many respects. You've got a wisecrackin, drinkin, womanizin detective and his sidekick. There are backstabbin partners and cheatin wimmen. There's a gathering of all the suspects for the announcement of the true murderer only seconds before the enframed is executed. Witnesses are killed as soon as they are identified.

What makes this interesting is that it begins with a film within the film. Its a bit tortured, so its obvious that the writers went to some trouble to arrange it. The same group of suspects is gathered to see this movie. It is a "re-enactment" of the discovery of the body, made by the prosecutor and involving all the original characters
Tweet